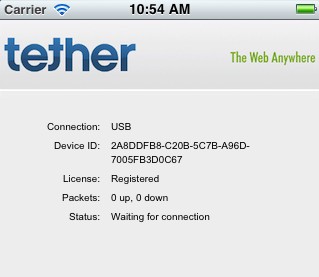 Late last year, a new application surfaced in the App Store called iTether. The software allowed you to share your iPhone’s 3G data connection with your Mac or PC using a USB cable.

But the app wasn’t even around for 48 hours before Apple pulled the plug on it. The company likely got pressured into removing it by carriers who didn’t like subscribers getting unlimited data tethering for free.

As noted by 9to5Mac, iTether has been reincarnated in the form of a web-based tethering service. This time around the app is written in HTML5, and is completely wireless. The company behind the app claims it’s completely encrypted and doesn’t require jailbreaking.

Because it’s a web-based service, Apple doesn’t have as much say in the matter as it would with an App Store app. But we’ll see if that stops it from getting involved.

The new iTether service costs $30 per year, but it looks like there is a deal going on right now that’ll let you score the first year for half the price. That’s definitely cheaper than carrier-provided tethering and it won’t force you to give up your unlimited data plan.

Will you be signing up?

Update: Jeff, our video guy and all-around tech guru, gave the new iTether a try earlier and it caused some major problems with his computer. We’re not saying this is a widespread issue, but we felt it was worth noting.