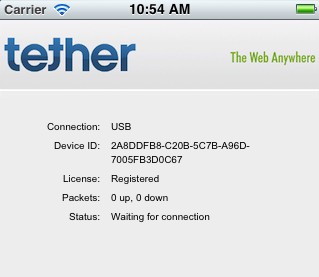 Well, that didn’t take long. Apple has pulled the iTether app from the App Store.

We told you about the $15 app last night that let anyone have unlimited tethering from their iPhone’s 3G connection to a desktop computer. The app bypassed carrier data plans and let anyone with a simple connection tether for free.

If you try to download iTether from the App Store right now, you’ll get a “not available” message. Apple has obviously woke up and pulled the app, as tethering apps like iTether cause carriers to get quite angry.

Those that got to download the app last night should still be able to use the service, providing that Tether.com keeps its servers up. The company behind the app already has award-winning apps on both Android and Blackberry.

In a tweet from the official Tether.com Twitter account earlier, the company made it clear that Apple carefully reviewed and approved their app for the iPhone, suggesting that this wasn’t merely a chance of something slipping past Apple’s strict review process.

In the short time that iTether in the App Store, the app quickly rocketed to the top of the App Store’s highest grossing apps list. Whether or not Apple chooses to actually pay Tether.com for its sales remains to be seen.

We’ll update this post with an official statement from Tether.com when one is given.

Around 12PM EST, Apple called our head office to let us know they were going to go ahead and pull our app iTether from the App Store. They stated it was because the app itself burdens the carrier network, however they offered us no way to remedy the solution… We were very clear when listing the app what the primary function was and they even followed up with several questions and requested a video demo then they approved the application.

We strongly disagree that it burdens a carrier’s network, as from our own data history on more than 500,000 users we know the average user consumes less than 200 MBs of data per month on Tether. In comparison, one TV show streamed from Netflix, an approved Apple App, could easily be in the 300-400 MBs range. Sure, there are some users that will consume way more than the average however that’s the case with any of these types of products.

Our team is very disappointed in Apple’s decision; as we strongly believe we help carriers better monetize their data stream by pushing customers into new data tiers further increasing their bottom-line. It is very anti-competitive to not allow any Tethering application to enter into this space to innovate. Our team has created a lot of innovative solutions for the BlackBerry product, which we were hoping to port over to the iPhone like end-to-end encryption, compression, website filtering and port filtering.

According to Apple, users who purchase iTether before it was pulled will continue to be able to use the product.

Our team is evaluating all of our options… Stay tuned.