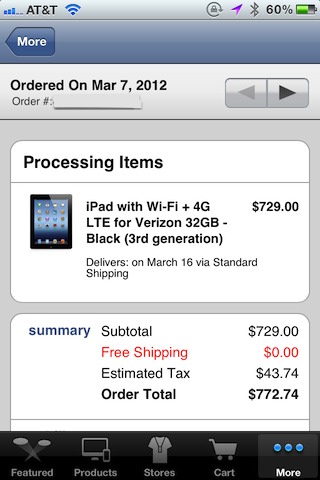 It’s that time of the year again. We’re all waiting on pins and needles until March 16th when the new iPad is officially available to the public.

As Cult of Mac’s Killian Bell points out, Apple’s own Apple Store app is a great way keep tabs on your new iPad and/or new Apple TV shipment.

It’s not going to make your new iPad hit your doorstep any faster, but it’s a nifty way to ease some of the anxiety of waiting…

Not only can you track your shipments, but you can also order a new iPad or Apple TV directly from the app as well. All you need is a valid Apple ID, and you’re good to go. You better do so soon, though, because shipment times are beginning to slip.

Do you have any additional tips to help alleviate the anxiety of waiting until release day?