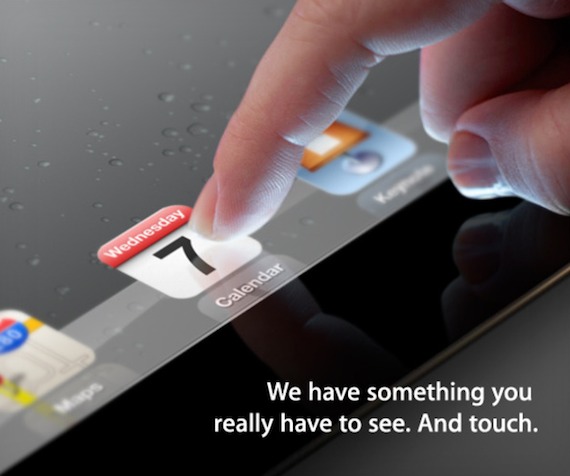 Citing a “reliable source”, VentureBeat reports that the rumored iPad 3 will actually called the iPad HD, which others have also indicated. Many believe Apple will pick iPad HD instead of iPad 3, because the next tablet out of the company will feature a ‘stunning’ Retina display. Apple’s next iPad is set to be announced at a media event March 7th, in San Francisco.

As we showed you last week, the Retina display’s quality on the iPad looks great. Following up with the rumors, it would make sense for Apple to use the iPad HD moniker…

Additionally, being named the iPad HD could indicate that Apple has chosen to use its dual-core A5X processor in the next iPad, rather than the rumored quad-core A6 processor that many have been hoping for.

In its invite to the media event, Apple included a brief message: ”We have something you really have to see. And touch.” The “see” portion of the message could refer to the rumored third-generation Apple TV, or perhaps the Retina display, which has been described as “truly amazing”.

VentureBeat also reports that Apple is buying 7.1-inch screen components, for the release of a smaller iPad later this year. Many other publications have been reporting that a 7-inch version of the iPad will be released by Apple by the end of the year — specifically around the beginning of Fall. Reports have been conflicting about the exact size of the tablet.

Many have thought of the rumored 7-inch version of the iPad to be a competitor to Amazon’s Kindle Fire and more. A smaller tablet would provide a cheaper price point for Apple to sell a tablet at.

It looks like we’ll just have to wait until Wednesday, for Apple’s next iPad — whatever it’s named. However, we’ll be waiting a little longer for word on a smaller iPad.

What do you think: iPad 3 or iPad HD?