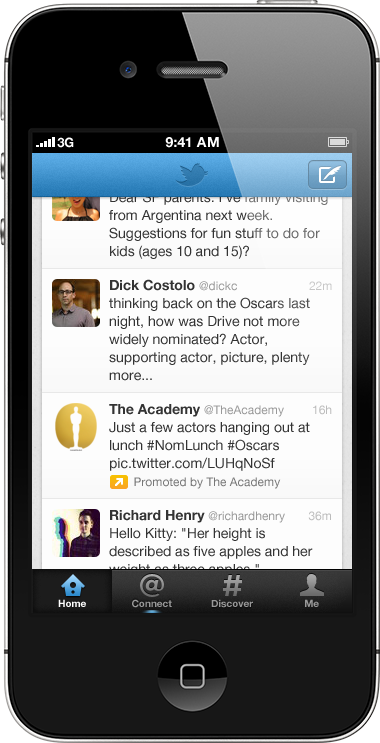 Two years ago, Twitter introduced ‘Promoted Products’, which are essentially ways for companies to advertise across the Twitter platform and gives Twitter the ability to make revenue. Companies can sign-up for Promoted Accounts, Tweets, and Trends as a way to bring notice to their service.

Today, Twitter announced that their iPhone app will start featuring Promoted Products. The advertising service was included in the latest Twitter for iOS update released last week. The Twitter crew will start sending out more Promoted Tweets, Accounts, and Trends to mobile devices over the next few weeks…

With our most recent app updates, Promoted Accounts are now in Twitter for iPhone and Twitter for Android. And in the coming weeks, we’ll begin introducing Promoted Tweets in the timeline on these mobile apps. Initially, a small number of users may see Promoted Tweets near the top of their timelines from brands they already follow. This will help ensure that people see important Tweets from the brands they care about.

Twitter’s Promoted Tweets will appear in the timeline, like any other tweet from someone you’re following. As you can see in the image above, it looks like a regular tweet and isn’t obtrusive.  As for Promoted Accounts, Twitter says these recommendations will be found in the Who to Follow section of the app.

Twitter for iPad will not feature ads for the time being, most likely because it hasn’t been gifted the recent Twitter update. On the iPhone, Twitter released an update that brought back swipe shortcuts and the ability to copy text to its iPhone app. It also featured better Direct Message handling and improved image quality. The update should roll out for the iPad soon.

You can’t blame Twitter for trying to find ways to make money. Ads being placed in apps will definitely show results, seeing as many users browse Twitter constantly on their iPhone.

Are you okay with Twitter placing ads in its mobile apps?