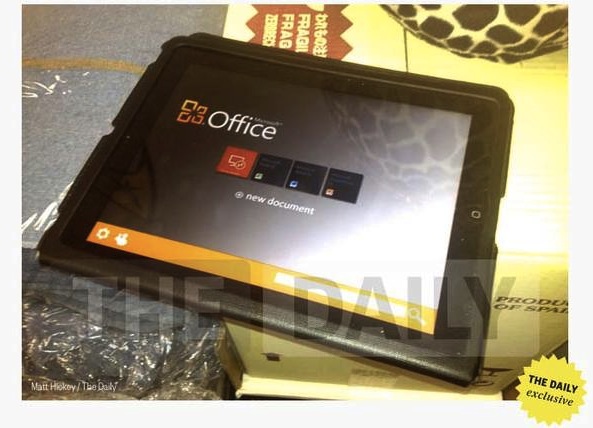 With the success the iPhone and iPad have had in the mobile computing space, you’d imagine Microsoft would have done a better job at making their flagship Office suite available for iOS. But they haven’t. Not until now anyway.

Back in November, the Daily reported that Microsoft was actively working on developing an iPad version of Office. Today, The Daily has once again scooped everyone when they got their hands on a working prototype version of the software…

According to the newspaper, the User Interface is very similar to that of OneNote, a note taking app part of the Office suite that Microsoft released in the App Store last month. It also apparently brings pieces of Metro, the UI the company wants to make the center piece of Windows 8.

So far, it appears that only Word, Excel, and PowerPoint will be part of the Office suite for iPad, but more might come in future updates. Files can be edited directly from the iPad and then be picked up and edited again online.

While the release date is unknown at this time, the design team has wrapped up the project, which hints at a submission to the App Store for approval soon.

Those of you who can’t wait for the official release of Microsoft Office for iPad can already use third party services such as OnLive and CloudOn to create and edit documents on the go using Office.

Are you excited about the future release of Office for iPad?

UPDATE: Microsoft denied the story, but The Daily sticks to it.