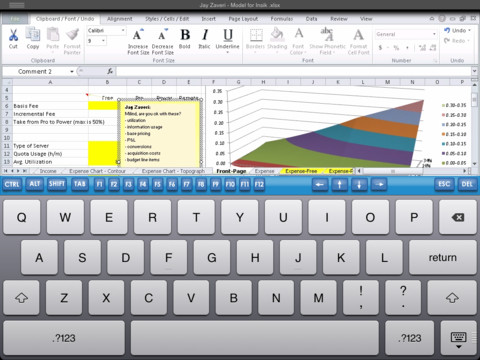 If you can’t wait for the rumored official iPad version of Microsoft’s popular Office suite, then you may be in luck. CloudOn’s app description suggests that the free iPad app will allow users to create and edit Word, Excel, and Powerpoint documents on the device via a cloud-based interface and Dropbox integration.

For a free app, being able to create and edit Microsoft Office documents on an iPad sounds pretty useful, assuming you’re based in the United States. The app is only available in the US App Store, presumably while CloudOn monitors its cloud systems.

Upon launching the app, downloaders are asked to create a new CloudOn account, as well as link the app to Dropbox. All documents will be saved to Dropbox, making them accessible anywhere.

We spent a few minutes testing the app out today, and while it was by no means an extensive test, it was long enough to get a feel for how well CloudOn works and what its limitations are.

Firstly, it is clear that a lot is going on over on CloudOn’s servers. Taps can take a second or two to register, and loading parts of the app can take longer than you would expect of a local app. It’s not a deal-breaker, but something to be aware of.

All the usual formatting options are there, as CloudOn claims, and we can see this doing a job in a pinch. That said, there are already plenty of apps that can edit Microsoft Office documents and also tie into Dropbox. Whether CloudOn is better than all of those, we’re not sure yet. It’s certainly an interesting proposition, though.

You can download CloudOn for free in the App Store.

If you’ve used CloudOn for longer than a few minutes we’d love to hear how it worked for you. Any problems or fancy features you’ve discovered? Let us know in the comments.