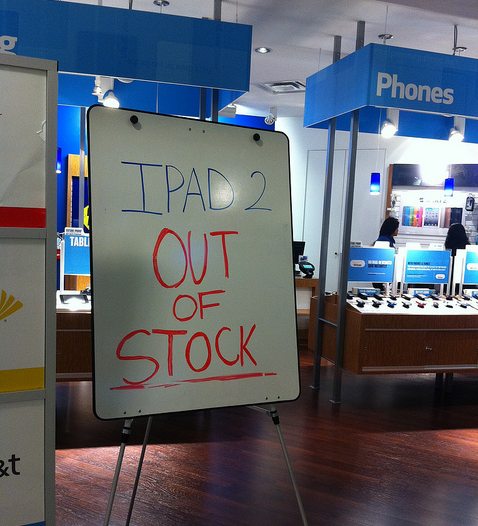 Between all of the leaked components and developer chatter, we’re almost certain that Apple is preparing to unveil its next-generation tablet in the near future.

But in case you needed more convincing, 9to5Mac has uncovered further evidence that the iPad 3 is on its way. The site is reporting that several major retailers are experiencing iPad 2 supply shortages…

“According to a source familiar with Apple’s product distribution channels, the iPad 2 WiFi + 3G is constrained. Supply shortages span beyond Apple’s own distribution channels, though, as major retailers are reporting “out of stock” status for the 3G iPad 2. This includes, but is likely not limited to, Carphone Warehouse and Orange in the United Kingdom. Carphone Warehouse is reporting shortages of five out of six of their 3G iPad 2 models (everything but the black 64GB unit), and Orange UK is reporting shortages of half of the 3G iPad 2 SKUs.”

Why are iPad 2 shortages such a big deal? Well retailers typically see supply constraints of an item just before it gets refreshed. That means that production of the product, in this case the iPad 2 3G, has slowed or even stopped, in anticipation of the next-generation tablet.

So why does there only seem to be shortages in 3G models? There’s a good chance that Apple could be keeping its iPad 2 Wi-Fi model around at a lowered price point, similar to what it did with the iPhone 4. And it wouldn’t make sense to keep an expensive 3G model around.

Apple’s next tablet is expected to feature a number of hardware upgrades and could be unveiled as early as the first week in March. It’s safe to say that if you were thinking about buying a new tablet, you might want to hold out for a few weeks and see what Apple has cooked up.