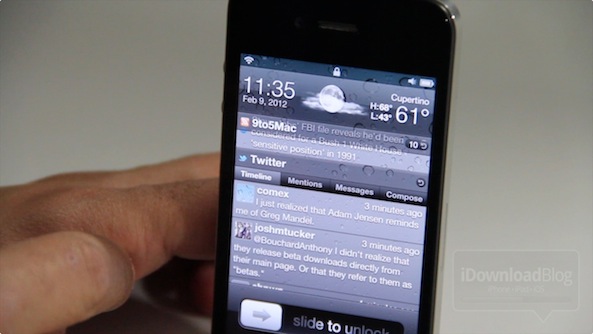 LockInfo is one of the few jailbreak apps that could single-handedly convinced people to jailbreak their iDevices over the past few years.

It’s arguably the primary inspiration behind iOS 5’s Notification Center. IntelliScreenX, one of the most popular jailbreak apps at the current moment replicates some of its features.

Without a doubt, LockInfo is a staple in the jailbreak community on a variety of levels. If you’re new to the iPhone, or you’ve just never given LockInfo a try for whatever reason, we recommend that you take a look at our video walkthrough inside…

This is a fairly lengthy video walkthrough, but then again, LockInfo is an insanely deep jailbreak app, and even more so since it has been optimized for iOS 5.

We have a comparison coming soon that pits LockInfo and IntelliScreenX head-to-head, but it’s obvious as to which is the deeper of the two: LockInfo, and by a country mile.

That’s not to say that deeper necessarily = better. Both apps have some great qualities, and some not-so-great qualities, which we’ll discuss further in our comparison post.

Is LockInfo worth its asking price? If you’re someone who will invest the needed time to learn the app’s ins and outs, you’re familiar with custom themes, and you’re comfortable configuring plugins — definitely.

But I’d still recommend using the trial for both this and IntelliScreenX before dropping your hard earned cash. Be sure to watch the video above for more details on the app’s many settings in order to get a good idea of what you will be dealing with. You can also watch our video walkthrough of IntelliScreenX to compare.

If you’re interested, LockInfo is $7.99 on Cydia’s ModMyi repo. What do you think about this classic jailbreak app?