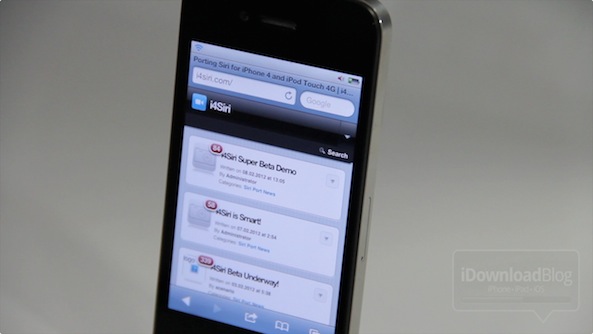 Ever since the possibility of a Siri Proxy server was first unveiled, it’s been all the rage. The promise of being able to run Siri on older devices? Count me and about a million other people in.

Now you can hardly look around without seeing some blurb about a 3rd party Siri server, and although security (or lack thereof) is still a big concern, it’s apparently not concerning enough to keep the masses of pre-iPhone 4S owners away.

Andrew Sheridan, one of the primary folks behind the i4Siri project reached out to me about a month ago asking me to try his Siri server. Here are some of the results of that trial…

To accomplish this feat, i4Siri uses Spire — chpwn’s Siri jailbreak tweak that we covered in-depth a while back.

Once installed, and a special certificate is installed, you can begin using the i4Siri server. The folks behind the project have implemented Cleverbot into i4Siri, which generates a response to every inquiry, regardless if Siri would have normally responded to it or not.

One thing to keep in mind about i4Siri is that it’s not your traditional iPhone 4S stock Siri implementation. For example, you can’t ask it where the nearest Italian restaurant is, and expect a relevant response. The same goes with setting alarm clocks and the like.

You can, however, use Siri jailbreak tweaks like MyAssistant, AssistantExtensions, and various others. That alone makes using i4Siri worth it, and adds much “replayability” to this sort of Siri implementation.

Since the server is still in beta, I found that 1 out of every 3 requests resulted in a failure message from Siri. That’s a little worrisome to be honest, because what happens when it goes out of beta and many more people are using the service? Siri’s popularity can not be underestimated, and even the greatest of planning can fall well short of expectations.

If the team behind i4Siri can pull off a miracle and make their server stable for the masses, then i4Siri is definitely worth checking out when it exists beta. Whether or not they can accomplish this is yet to be seen. Keep your eyes peeled for more info. Again, the server is not yet available publicly, but more info should be divulged soon.