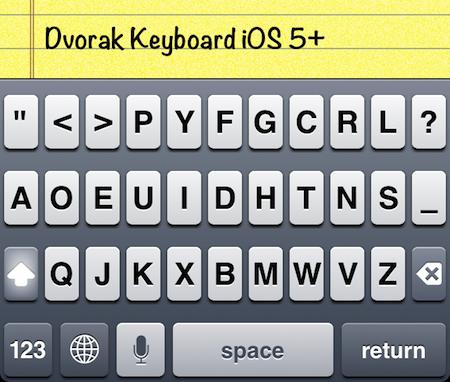 The Dvorak keyboard layout was patented in 1936 by Dr. August Dvorak (thanks Wikipedia). Proponents of the layout believe that it requires less finger motion than the traditional QWERTY style, allowing you to type faster with fewer errors.

If you happen to be a fan of the Dvorak layout, or would just like to see what it looks like, a new jailbreak tweak has just surfaced in Cydia that will install the keyboard on your iOS 5 device…

Installing Drew Hamilton’s Dvorak Keyboard iOS 5+ tweak is about as easy as it gets. In fact, it’s done automatically once you’ve downloaded the package from Cydia. And the only way to disable it is to delete it.

Hamilton notes that installing this tweak will erase the Russian keyboard, so be aware if that’s something that you use. Otherwise, if you want to check out Dvorak Keyboard iOS 5+, you can find it in the BigBoss repo for free.

Have you tried the Dvorak Keyboard?