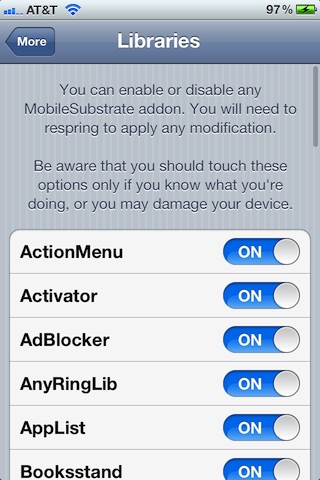 Springtomize 2 — hands down the most robust tweak when it comes to customizing your iDevice — just received an update to add native iPad support yesterday.

That update reminded me of one of Springtomize 2’s extremely useful, but often overlooked features that helps out immensely with troubleshooting problems.

Like SBSettings, Springtomize 2 contains a “MobileSubstrate Addons” sections that allows you to disable tweaks without having to uninstall them. It’s sort of a hidden feature, but we’ll show you how to use it in this brief video walkthrough…

This is extremely useful for figuring out if a specific tweak is causing a conflict with another, crashing, etc. What’s really nice is that you can access this even if you’re in safe mode. This way you don’t have to take extreme measures and outright uninstall a tweak when you suspect it’s the problem child.

If you have SBSettings, it too does something similar; although I prefer Springtomize 2 in this area because it doesn’t force you to respring immediately after exiting the app.

Do you utilize this method of troubleshooting, or have you found another means to be effective? Let us know in the comments below.