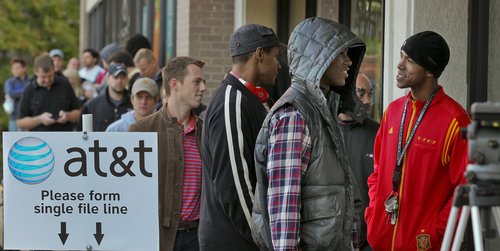 If you needed more proofs that the iPhone kicks ass, you may want to look at AT&T’s financial results for last quarter. Even though the company had to swallow a big $4.2 billion pill for pulling out of the T-Mobile buyout, AT&T actually did pretty good.

I’ll spare you the boring financial numbers, which you can access by clicking the link above, but we’re just going to focus on what we really care about: iPhone sales numbers. And they are big…

Do you want more insane numbers? Fine. Following Apple’s stellar financial results for last quarter, we learned that the company had sold 37.04 million iPhones worldwide. Again, if you do the math, it means that AT&T was responsible for selling 20% of all iPhones sold in the world. Again, it’s just amazing.

In comparison, Verizon sold only 4.2 million iPhones during last quarter. These are great numbers, but compared to AT&T’s, it’s not so impressive. AT&T does have an advantage though. Because it had been the exclusive carrier of the iPhone for so long, it holds a lead that only time will allow Verizon to catch up with.

Looking at those numbers, no wonder why Apple is now the top smartphone manufacturer in the world.