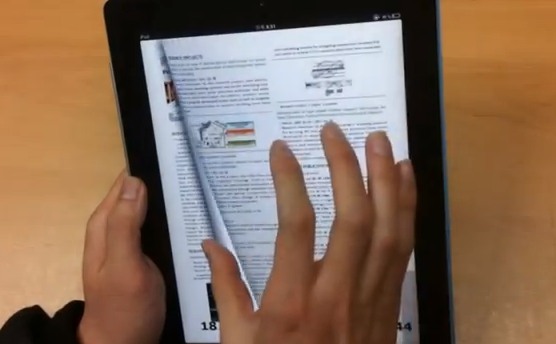 Apple’s recent release of iBooks 2 has truly revolutionized the textbook industry, but the multi-touch experience in iBooks could use some major improvements. As it stands, Apple’s official eBook app is limited to one basic swiping motion between pages. The KAIST Institute of Information Technology Convergence’s new patented multi-touch interface for eBooks, on the other hand, is quite the contrary.

The prototype has several new multi-touch gestures that allow for you to flip through pages, bookmark with your fingers, turn through multiple pages at once, write page numbers, and more. You have to watch the video demonstration for yourself…

The downside to the prototype is that its use of private APIs means that it would not be approved on the App Store should it ever be released. If the institution is able to work around this dilemma, however, it would be a very promising concept that would be a considerable improvements to iBooks as it stands, don’t you think?