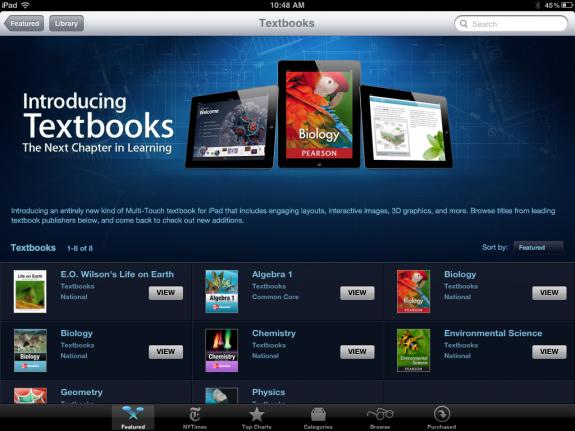 During its New York-based media event this morning, Apple announced its plans to get into the digital textbook publishing business. We have a good recap of the event in case you missed it, but the gist of it all is fairly straight-forward.

Using new applications like iBooks 2 and iBooks Author, Apple plans to disrupt the textbook industry by making it easier for folks to publish and consume educational content. And what’s more impressive, they’re giving the tools away for free…

But don’t be fooled. Apple’s intentions are far from philanthropical. The company is trying to get in on an $8 billion dollar per year industry. Here’s a breakdown of the economics behind Apple’s textbook initiative.

The price cap for publishers has been set at $14.99 per textbook. This means that they can price their books however they want, as long as it’s not over $15 dollars. This could be a game-changer for college students, as college-level textbooks typically run anywhere between $100 and $300. And even used copies, if they’re available, are still half as expensive. That’s a big difference.

But with such a big price drop, why on earth would publishers agree to all of this? Consensus from Apple’s publishing partners seems to be that they figure that the amount of money the’ll lose on the cost of each book will be made up in the total volume they’ll sell in the long run. iBooks, remember, are non-transferable.

And now for Apple’s piece of the pie. Early reports claim that the company will be taking its usual 30% off the top of whatever the publishers make, just like it does with apps and developers. It’s a familiar business model that has, so far, served Apple quite well.

While everything looks good on paper (or should we say tablets), only time will tell if Apple’s move into the textbook industry is worth all of the hype. It still has to convince tens of thousands of schools to adopt the platform, which involves putting a $499 tablet in every student’s hands. And that could prove to be a difficult task.