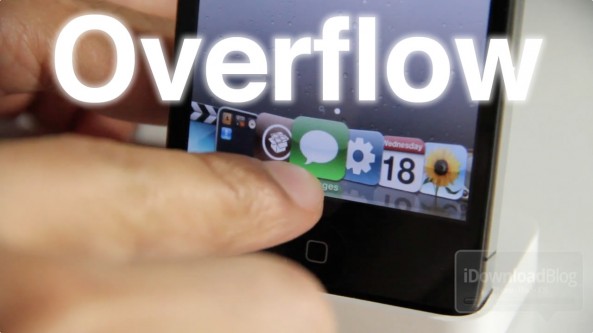 If you’re looking for one of the most authentic representations of Cover Flow for your iOS device’s dock, then look no further than Overflow — a tweak that lends a Cover Flow effect to existing jailbreak tweaks like Infinidock.

It’s an impressive looking effect, and can be had if you have a jailbroken iPhone and about $2.00 to spare. Check inside as we take it for a, ahem…spin…

Now, this certainly isn’t the first implementation of a Cover Flow style in iOS’s dock. In fact, the uber-tweak Springtomize 2 features such functionality as well, though it looks a bit different than what you get with Overflow.

The fact of the matter is that you may prefer Springtomize 2’s implementation a bit better, depending on the type of style you’re going for. Either way, you’re going to need a tweak like Infinidock to give you a decent scrolling effect across your dock’s icons.

In a few minutes, I’ll add a video of Springtomize 2’s implementation of scrolling for comparison.

Until then, let us know what you think about Overflow and the Cover Flow effect in general. We know this hasn’t been the first time a tweak like this has surfaced, we’re almost certain we’ve seen something similar in the past, but this is the first time it’s garnered this much attention from the blogosphere.