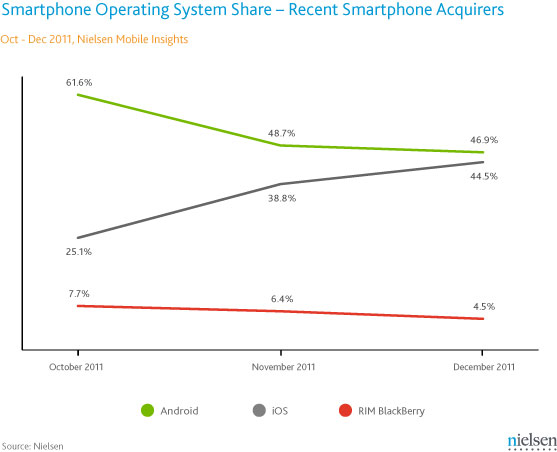 New sales data from marketing firm Nielsen has revealed that Apple’s launch of the iPhone 4S in October has had a tremendous impact on overall iOS market share in the past quarter. While Android had a stranglehold on the mobile sector in October, with an impressive 61.6% share of the market, its numbers slipped to just 46.9% in December due to an impressive 20% surge by iOS during the quarter.

According to AppleInsider, Apple’s mobile platform peaked at 44.5% in market share, which put it neck-and-neck with its rival Android…

Despite the iPhone’s efforts in closing the gap, Android still remains the most popular mobile platform among U.S. consumers. Nevertheless, Apple has much less to be concerned about than its Waterloo-based competitor.

BlackBerry makers Research in Motion continued its downward trend, decreasing to just 4.5% in market share in December in contrast to its 7.7% share it held just three months earlier. The remaining five percent in market share was split between Microsoft’s Windows Phone 7 and Windows Mobile platforms, Nokia’s Symbian, and HP’s webOS.