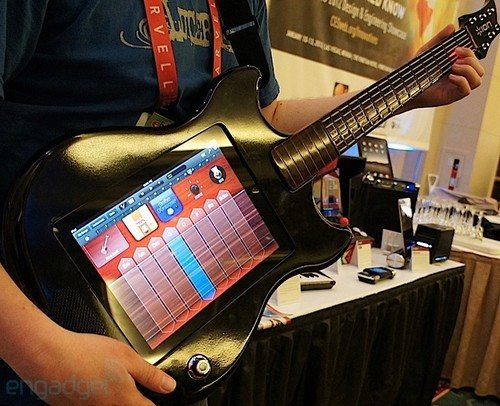 Looking for a fun, innovative way to learn how to play the guitar? Well if you happen to own an iPad, you might not have to look further than Ion Audio‘s new Guitar Apprentice.

The guitar-shaped tablet accessory made its debut last week at the Consumer Electronics Show, and it’s been getting a lot of positive feedback. Keep reading for an overview of the Apprentice and a video of it in action…

From the company that brought you the popular iCade, comes the Guitar Apprentice. It’s chock full of features including a learn-to-play-as-you-go light-up fretboard, a built-in speaker, and a free guitar-teaching iPad app.

And since the Apprentice uses iOS Core MIDI, it’s compatible with dozens of other popular iPad applications — including GarageBand.

Despite the fact that learning to strum on a tablet looks difficult, we think Ion Audio might really be onto something here. The Guitar Apprentice should hit the market sometime later this year and is expected to retail for around $100.

For more information, make sure to visit Ion Audio’s website.

What do you think of the Guitar Apprentice? Coud it be a game-changer?