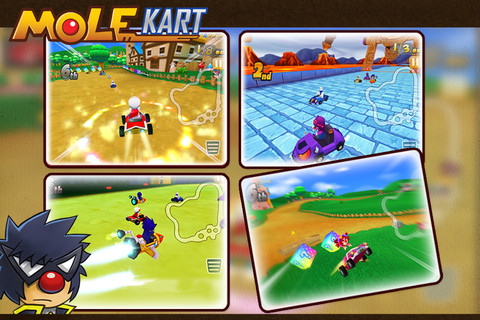 Oh dear, oh dear, oh dear. We love Mario Kart as much as anyone, we grew up with it in various incarnations across all manner of devices, which is why this is even more maddening.

Mole Kart, available for download from Apple’s App Store right now, is what can best be described as a Mario Kart clone. That is, it’s basically Mario Kart, but without the buttery smooth animations and Nintendo charm. We are not talking about Mole Kart being similar in that it’s karts racing around a track, either. Mole Kart is so similar to Mario Kart that if you have played the Wii version of the game then you’ll already know the tracks involved in this iOS clone.

It’s that much of a rip-off…

We’d expect this to get pulled by Apple sooner rather than later, and if you check out this video you’ll know why. Even the animations are the same as Mario Kart except, well, they’re not quite as good!

As if to add insult to injury, the game only comes with a handful of tracks to race on, with the rest being available as in-app purchases. Clearly the initial $2.99 wasn’t enough money for these guys.

We suspect someone at Nintendo is sharpening their Red Shells right about now. If you’ into collecting ephemeral iOS apps, then get your hands on this one now, because it certainly won’t last long.