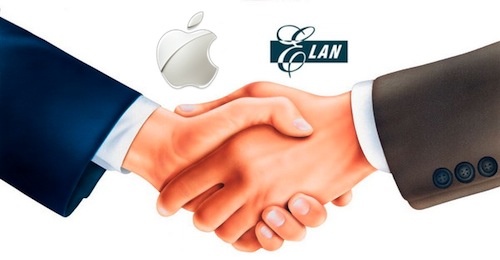 In April of 2009, Taiwanese chip and touch screen maker Elan Microelectronics Corp. filed a lawsuit against Apple, claiming that the Cupertino-based company had infringed upon many of its touch-based patents. Apple counterclaimed in a Northern California district court with allegations that Elan had violated multiple Apple patents itself.

The patent in question, U.S. Patent Number 5,825,352, is described as a “multiple fingers contact sensing method for emulating mouse buttons and mouse operations on a touch sensor pad.” The U.S. International Trade Commission investigated the claims in April 2010, but ultimately ruled in June 2010 that Elan had failed to establish that Apple was violating the patent.

The case remained unresolved, until today…

Apple and Elan Microelectronics Corp. reached a mutual cross-licensing agreement that authorizes both companies to continue using technologies based on the infringing patents. As part of the agreement, Apple has agreed to pay the Taiwanese firm an out-of-court settlement worth $5,000,000.

Apple has been involved in a number of lawsuits worldwide, with many cases involving some of the company’s top competitors. In April 2010, Apple sued South Korean handset maker Samsung based on claims that its Galaxy tablets and smartphones copied the look and feel of the iPad and iPhone. More recently, Apple won a patent case with HTC that called for an import ban on the infringing devices effective April 19th, 2012.

[Newswire CNA via The Next Web]