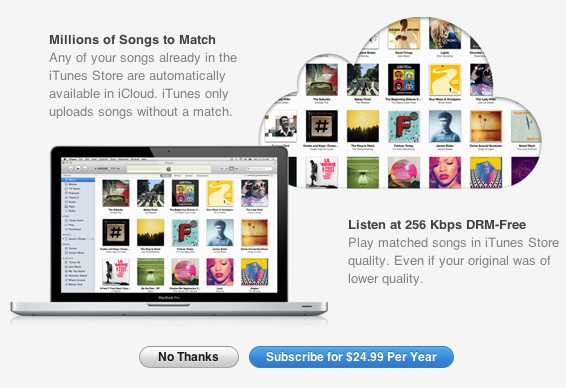 Apple’s launch of iTunes Match has been uncharacteristically vague. From the moment the service was announced to the recent clarification of just who can and cannot receive it, Apple has been less than clear on just what iTunes Match is, how it works, and why you would want to pay $25 for it.

Apple has attempted to clear things up by launching a dedicated iTunes Match page on its website. Previously, iTunes Match was deemed only to be worthy of a sub-section inside the iTunes are of the site. It seems someone at Apple decided to give iTunes Match a promotion.

Along with plenty of description and explanation, Apple has also put together a new video which shows off its latest service, including offering more information about how it works…

The walkthrough video also raises an old question: does iTunes Match stream content to devices, or is it purely a download-only service? Apple’s own iTunes Match web page tries to answer that question for once and for all. The answer? Both.

“On a computer, any songs stored in iCloud will stream over the air when played, though you can download them at any time by clicking the iCloud download button. iOS devices will start playing tracks from iCloud as they download and will store them so that you can listen to them later even if you don’t have a network connection. Apple TV only streams songs.”

You can hit the video direct from this link, but we suggest you give the full page a read should you need any clarification on what iTunes Match actually does.

The fact that any clarification is required at all shows just what a poor job Apple has done with the iTunes Match launch, and we would love to know what the signup numbers have been like for the service. We can’t help but think Apple would have been better off just going after Spotify by pushing iTunes Match as a streaming service.