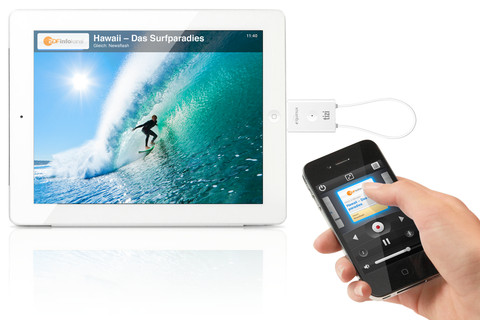 Some things still blow our minds, even with so much great technology and gadgetry being released every day. It takes a lot, but sometimes we just can’t help bit sit there and say “wow, that’s pretty cool.” Tizi and the Tizi Remote app is one such situation.

Tizi is Germany’s answer to Slingbox, allowing over-the-air content to be streamed to just about anything, including an iPad using the Tizi accessory. As if that wasn’t cool enough, the company has now also released an app that allows an iPhone to act as a remote control for the iPad app, complete with Siri-powered voice control.

Even if you do not understand German, the video showing off the Tizi kit in-action is well worth watching – if you do happen to be German, you probably won’t get to the end of the video before you are off trying to get the required kit ordered!

With the new Tizi Remote app, owners of an iPhone can use the app to control the iPad app remotely, which is cool by itself. Add in the fact that the app will let you control the whole thing using just your voice, and you are onto a winner.

The Tizi remote app is free, while the Tizi and Tizi go cost €139.99 and €99.99, respectively. Unfortunately, you will need to pop on over to Germany to pick either piece of hardware up, with no US release expected.