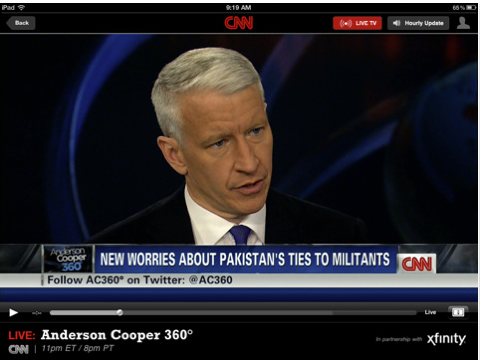 CNN announced earlier today that CNN and HLN will be streaming a constant 24/7 feed of programming on all CNN iOS apps, as well offering the continued streaming on CNN.com for desktop users.

Although CNN is the first news network (in the United States, BBC has done it for a while now) to stream their channel 24/7 online, there is a catch. In order to watch CNN on your iDevice on the go, you need to be subscribed to a TV multi-channel service. It’s available to subscribers of AT&T, Comcast, Cox, DISH Network, Suddenlink and Verizon, as well as some satellite services…

Unfortunately, just like HBOGo, poor Time Warner customers will be left out once again, as they do not support the new live stream by CNN. CNN’s press release notes that about 50 million subscribers will have access to the streams.

To get the new CNN goodies, update your CNN iOS app to version 1.2 in the App Store. In order to get the streams, you log in through whatever satellite or cable provider you have (i.e. if you’re a Comcast cable subscriber, you’d log in through your Comcast account to get access to the stream).

Although I won’t use this (I much rather prefer my SlingBox), it could be a good first step for other news networks to join the streaming bandwagon. Will you watch CNN’s streams on your iDevice?