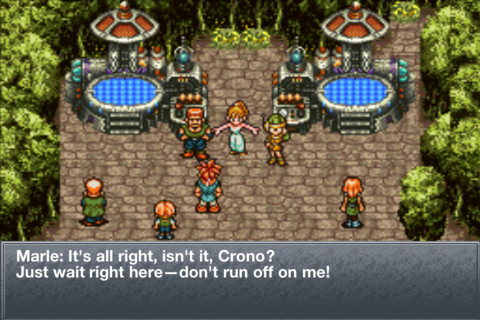 If you’re of a certain age, then you’ll know all about Chrono Trigger. A giant hit in the days of Nintendo’s SNES, Chrono Trigger is a classic RPG which has seen re-release after re-release on various platforms since its initial outing way back in 1995.

Now iPhone and iPod touch owners can play the classic game once more, after the Chrono Trigger’s developers released it today to absolutely no fanfare. Come on Square-Enix, a press release wouldn’t have killed you, would it?

Chrono Trigger fans have been waiting for this day for quite some time, and while Square-Enix had said the game was on its way, we didn’t know when we would be able to re-live our misspent youth. Turns out it’s today…

Chrono Trigger is available to download now from the App Store for a not-inconsiderable $9.99. That price may seem steep considering the price most games cost on the App Store, but if you’re as nostalgic as us then you’ll probably gladly pay it. That said, we would have liked to have seen an iPad version of the game released as well, but alas, you can’t have everything.

“Featuring revolutionary gameplay and an epic tale of time travel and high adventure, CHRONO TRIGGER captured the hearts of a gaming generation, selling over three-and-a-half million copies around the world.”

While the iOS release of Chrono Trigger may not sell quite as many copies as some of its previous releases, we’d be surprised if it didn’t find its way to a healthy position on the App Store’s Top Paid Apps list at some point, if only because of the pent-up demand the game seems to have garnered.

Will you be stumping up the $10 to play an old classic, or are you more of a Tiny Wings and Whale Trail kinda iPhone gamer?