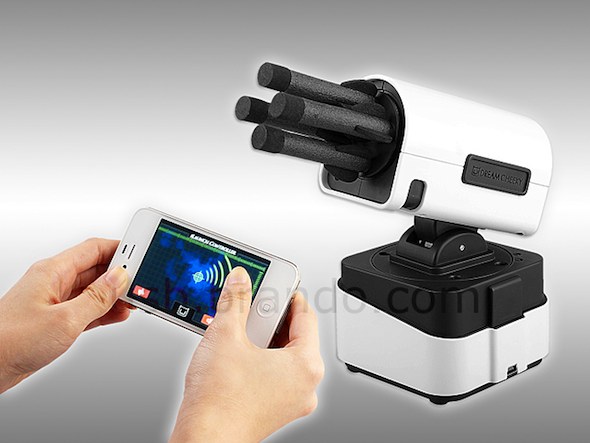 iPhone-controlled toys have been popping up all over the place this year. There’s been helicopters, Drones, and even robots. But we haven’t come across a dedicated desktop missile launcher… until now.

The iLaunch Thunder is, well, a desktop missile launcher that can rotate and fire foam missiles at nearby targets. The cool part is that you can control the rotating, and the missile launching, with any iOS device…

Using its accompanying iOS application, aim the iLaunch Thunder at any target within 25 feet, and fire! The gun rotates up to 270 degrees horizontally, and 40 degrees vertically, so if your target isn’t directly in its line of site, simply move it.

As you can see, this thing moves and sounds like it should be on a warship, rather than your office desk. And while we think it’s pretty cool, we’re not sure it’s worth the $82 price tag (and that’s on sale, it’s normally $97). But if you’re interested in the iLaunch Thunder, you can order one from USB Brando.

What do you think of the iOS-controlled gun?