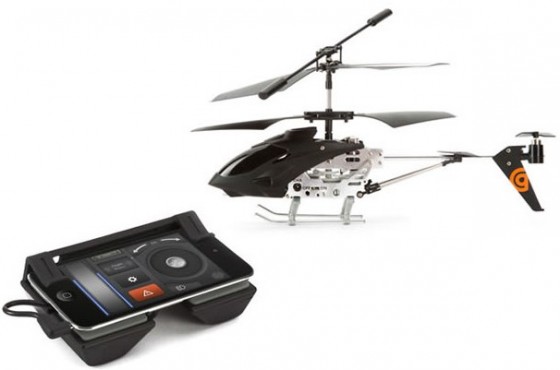 During the first few years of the iPhone’s existence, using the smartphone to control RC vehicles was limited to intelligent hobbyists. But thanks to the introduction of the App Store and innovation from 3rd party developers, that’s no longer the case.

Nowadays there are plenty of iOS-powered toys on the market to choose from. The latest one to surface is Griffin’s HELO TC. The accessory-makers just announced the iOS-controlled helicopter, which will provide users with loads of entertainment, without breaking the bank…

This isn’t the first helicopter accessory we’ve seen for Apple’s mobile platform. A few months ago, we told you about the iRemoco, a Kickstarter project (which has since been funded). Although the products are very similar, there is one major difference between the two. Price.

Griffin is serving up the HELO TC for just $49.99 a pop, which is half of what the iRemoco is expected cost (and 1/6th the price of the AR.Drone). The low price certainly makes the device more appealing, and should work in its favor with holiday season approaching.

The helicopter will be powered by an attachable case, which requires 4 AAA batteries, and of course an iOS app. The case plugs into the headphone jack, and sends audible tones to an IR transmitter that talks to the helicopter.

Yeah, I said IR transmitter. Which means that unlike the aforementioned WiFi models, you’ll have to have line-of-sight with the helicopter at all times to maintain control. But for $50 bucks, you had to expect some kind of trade-off.

The HELO TC currently says out-of-stock, but it should become available in the next few months. The app is already out and can be downloaded for free from the App Store.

With features like one-touch auto land and easy-to-learn flight controls, the HELO TC looks promising. My only question is, is it going to break the first time it hits the wall? Either way, I know what I’m getting myself for Christmas this year.

What do you think of Griffin’s new helicopter?