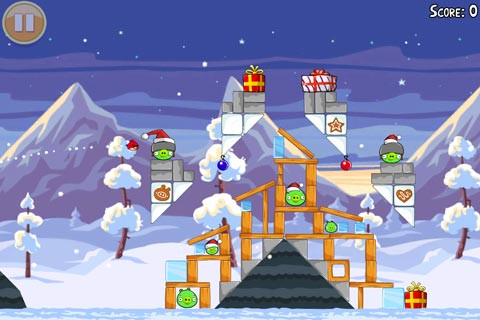 The last time the app was updated was for Halloween, and that included 30 new levels. This time around, Angry Birds “Wreck the Halls” is sure to keep you entertained over the Christmas season.

Along with 25 new levels, this update also adds more special, seasonal surprises. Players can also use the “Mighty Eagle” to blast through difficult levels.

It’s the most wonderful time of the year, but the pigs are up to their usual tricks! Use your best puzzle skills on the Angry Birds holiday calendar – 25 new festive levels featuring gingerbread cookies, bells, twinkling lights, and candy canes. The newest Angry Bird will also make an appearance! And on the last day you’ll meet the big pig himself… It’s going to be an egg-citing holiday season!

About a month ago, Rovio announced that Angry Birds has accumulated over 500 million downloads since its release.

If you’re interested in buying the latest edition of Angry Birds Seasons, you can do so in the App Store for $0.99. You can download the HD iPad version also for $1.99.