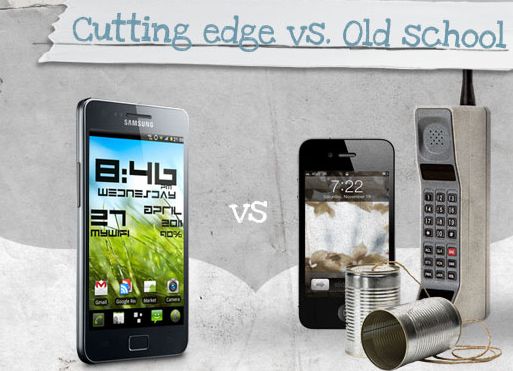 Last week, Samsung started airing its latest TV ad which not-so-subtly poked fun at iPhone users. The commercial showed a group of young adults, waiting in what appeared to be a line for the new iPhone, drooling over a Galaxy S II handset.

A lot of folks dismissed the advert as bad marketing, as you typically don’t want to criticize the audience you are trying to attract. But judging by its Facebook page, it seems the commercial was only the beginning of Samsung’s anti-Apple campaign…

The Korean company posted the above “old school” image on its official US Facebook page, suggesting that the iPhone 4S is far behind the times. Apple was criticized last month when it unveiled its new handset without newer technology like LTE.

To be fair, the iPhone 4S supports AT&T’s HSPA+ network, as does the carrier’s version of the Samsung’s Galaxy S II. All of the other features line up pretty evenly as well, from the dual core processors, to the 8MP cameras. So the 1980’s cell phone is a bit of a stretch.

The company seems to be committed to the campaign though, and it appears to be generating a fair amount of a buzz, so it could be working. But as aforementioned, bashing the competition isn’t the best way to convert users. It tends to cause people to defend their choice of product, rather than be interested in yours.

What do you think of the “old school” ad?