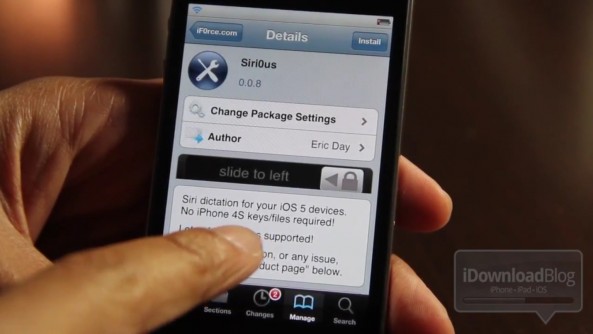 Siri0us, the jailbreak tweak that allows iPhone 4, 3GS, and iPod touch owners to use Siri dictation, has been pulled from the Cydia store. We exclusively showed you Siri0us in action a couple of days ago, and many have started using the hack to use a Nuance-flavored version of Siri’s dictation feature on older iDevices.

After the Siri0us servers experienced several outages due to high traffic over the last 48 hours, the developer, Eric Day, has removed Siri0us from Cydia. Eric is looking for a different voice recognition service that he can use legally in his tweak.

In a series of messages on Twitter, Eric confirmed that he has indeed pulled Siri0us while he looks for viable alternatives to Nuance’s voice recognition technology. Apparently, Nuance has refused to sell Eric the rights to use their technology in his tweak, so now he must look into free alternatives.

Siri0us still seems to be working for those that have installed the tweak, but there’s no telling if the plug will be pulled soon until a new solution is implemented by the developer.

Here’s our video demonstration of Siri0us for those of you that missed it the first time:

Is Siri0us still working for you?