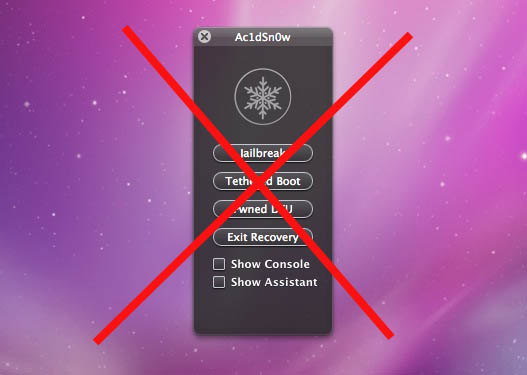 Earlier today we reported on the recently released iOS 5 jailbreak tool called Ac1dSn0w. The Mac-only utility came from the Pwn Dev Team, who aren’t as highly regarded as the Dev and Chronic Dev teams, but they’re well-known.

With that in mind, we posted a tutorial, as we always do, on how to jailbreak your iOS 5 device using the new software. We’ve since learned that Ac1dSn0w contains Apple’s copyrighted code, so therefore it’s illegal to use…

MuscleNerd, a prominent figure in the jailbreak community, just explained the problem on the MMI forums:

Typically, hackers reverse-engineer Apple’s code to make it their own, so it doesn’t infringe on any copyrights. Ac1dSn0w, however, doesn’t follow this trend. So that’s why we have decided to pull the download link, and can’t recommend the software until it is fixed.

We’ve reached out to the Pwn Dev Team, but they have not yet given a comment on the situation.

Update: Ac1dSn0w Beta 2 has been released, and the software fixes the copyright issues mentioned in this article.