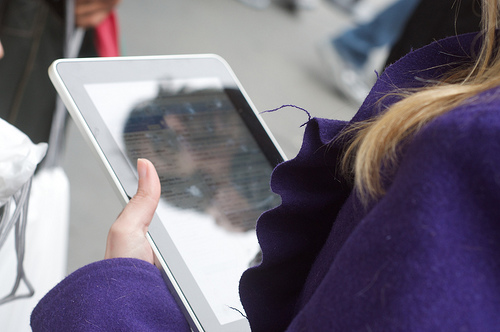 Apple designed its tablet to be a portable device. It even shaved inches (and weight) off of the original iPad to make its second generation tablet more mobile. But still, at nearly one and a half pounds, with a 10 inch display, how portable can it really be?

The results from a recent survey by McKinsey and Company suggests that there aren’t many folks using their iPads on the go. In fact, the living room was found to be the number one place that people pull out the iPad…

According to the report, McKinsey surveyed over 15,000 consumers across 15 countries as part of its “iConsumer” profile project. The firm presented its findings yesterday morning at Forbes’ Techonomy conference.

Here’s GigaOM on the results:

“Of the iPad owners McKinsey surveyed, it found that 62 percent never take their iPad outside their house. In other words, it’s being used as just another home computer, like a replacement laptop for tasks such as watching video or browsing the web. While the iPad is “finding its way into places in the home we didn’t have computing in the past,” the living room is where people use their iPad: 70 percent of usage takes place there.”

Are the results really all that surprising? Who wants to lug a 10″ tablet around town when they can perform many of the same tasks on their iPhone? It would be interesting to see similar data for smaller tablets, like the newly-released Kindle Fire.

Where do you use your iPad?