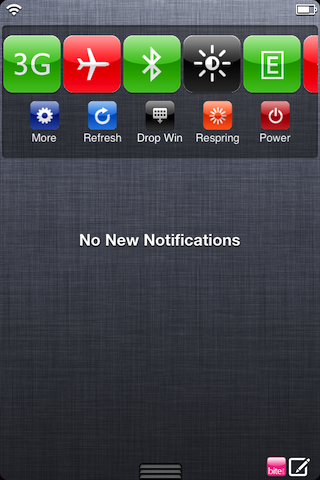 The latest version of biteSMS is shaping up to be something special. The team has worked hard for months, issuing beta after beta to get version 6 of our favorite jailbreak messaging client just right for iOS 5.

We already covered some of biteSMS’ upcoming new features before, but this time around we’re focusing exclusively on one feature in particular — quick compose from Notification Center.

IntelliScreenX has it, and now the biteSMS team has it as well. Check inside for a full video walkthrough of the new quick compose elements of biteSMS…

As you can see, the quick compose in biteSMS looks extremely similar to that of IntelliScreenX, which is a great thing since IntelliScreenX looks awesome in itself.

The biteSMS team says that version 6.0.15 of the beta — the version featured in the video — is close to final and pretty stable. Hopefully we can expect an official release in the coming weeks.

If you want to try out the beta version for yourself, simply add the following repo address to your Cydia sources: http://cydia.bitesms.com

Are you as excited about the new biteSMS as we are? Sound off in the comments below.