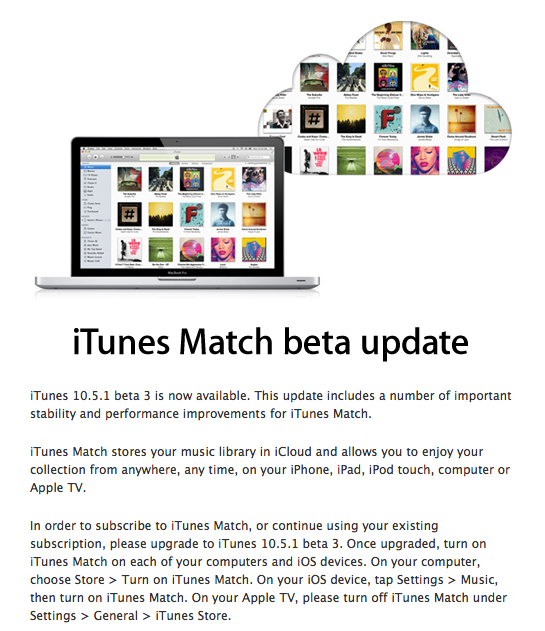 Admittedly, we were expecting a final version of iTunes with iTunes Match to hit the scene any day now, but it looks like Apple is still squashing some remaining bugs.

In other words, iTunes 10.5.1 Beta 3 with iTunes Match was just seeded to developers a few minutes ago. We’ve installed it, and we can report that the overall experience is much faster than previous betas…

Earlier today at 10AM PST, Apple deleted all iCloud libraries in preparation for the official launch of iTunes Match. Whether or not that official launch is still imminent is anyone’s guess, but in the meantime we’ve got another beta version of iTunes to play with.

I’ve installed it and tested it, and I can report that iTunes Match Beta 3 is faster and more responsive than the previous betas. That includes the actual matching on iTunes, and the music downloads on the iOS devices. My album art downloaded faster on my iPhone using iTunes Match beta 3. Overall, the experience is much more consistent with that of a final release than we’ve seen in the past. Are you experiencing similar results?

iTunes Match is the cloud service that scans all of the music in your iTunes library and matches it with the content that Apple has in its digital repository. This allows you to stream the matched music in high quality to iOS devices like the iPhone, iPad, iPod touch and yes, even the Apple TV.

For any music that Apple doesn’t have on file, iTunes will upload those tracks to your iCloud storage for streaming. As long as your music isn’t some obscure folk-rap from Fiji, nine times out of ten iTunes will be able to match your music, eliminating the need to upload your entire library to iCloud for streaming to the aforementioned devices.

It’s a great idea that costs only $24.99 a year. As a bonus, those who signed up during iTunes Match’s beta phase will receive an extra three months of the service at no additional charge.

If you’re still a bit shaky about how the entire service works, then feel free to tune into the following video walkthrough that shows iTunes Match in action.

The same procedure for the first beta of iTunes match still rings true for Beta 3.

How to Use iTunes Match Beta 3

Step 1: Install iTunes 10.5.1 Beta 3 With iTunes Match from Apple’s Developer Portal. You must be a registered Apple developer.

Step 2: Once installed, go to Store > Turn On iTunes Match

Step 3: iTunes will likely prompt your for your Apple ID. If you’ve never used iTunes Match before, you will have to accept the payment terms.

Step 4: iTunes will scan your library and match your music. It will then upload any music it can’t match to iCloud. This could take hours depending on the circumstances, so be patient.

Step 5: Once complete, enable iTunes Match on your iOS device. For iPhones, iPads and iPod Touches, go to Settings > Music > and enable the iTunes Match setting at the top of the screen. For Apple TV please follow this tutorial.

I’d say that with all of the deleting and re-uploading we’ve had to do over the last few months, coupled with the delay of the launch — remember, the service was supposed to launch no later than the end of October — that extra three free months is looking more and more deserved with each passing day.

What do you think? Are you tired of waiting for iTunes Match, or are you glad that Apple is taking their time to work out all of the kinks?