According to PatentlyApple, Apple was awarded another 14 patents yesterday from the United States Patent and Trademark Office (USPTO). Out of the 14 recognized inventions, two of them really stood out.

The two patents are related to multi-touch technology, and could come in handy in the ongoing patent war between Apple and Android partners. In fact, one of the filings relates to the touch-screen tech found in the original iPhone…

The first multi-touch patent describes “front-end signal compensation” on a display, and the second describes a method of combining an LCD screen with a touch panel to save power and space inside an electronic device. 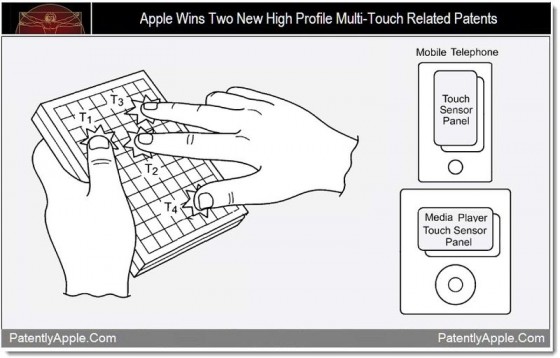 Steve Jobs reportedly hit the roof when he saw HTC unveil a handset in early 2010 that offered a lot of the same features as the iPhone—particularly multi-touch features like pinch-to-zoom.

Yeah, don’t be shocked if these patents turn up in a courtroom.