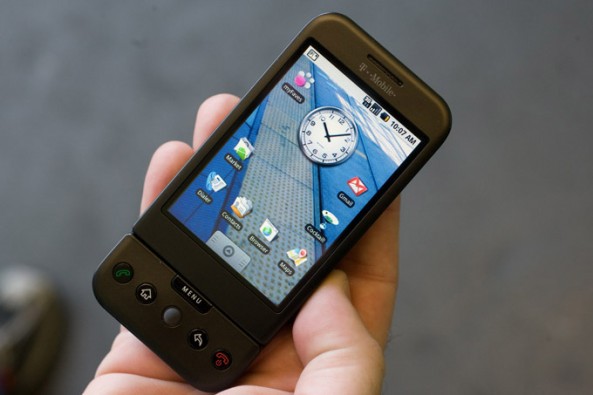 When the original iPhone launched in 2007, Google and Apple actually had a good relationship. Google was set to be the iPhone’s default search engine, and Google was also going to power the handset’s Maps application. Everything was wonderful. And then came Android.

The Android operating system was born in Palo Alto, California in 2003. Two years later, the company was acquired by—you guessed it—Google. The deal was worth an estimated $50 million, but the Android OS could end up costing Google much more than that…

To understand whether or not Android has been or will be a successful venture for Google, you have to understand why it all began. Google’s sole purpose for entering the mobile OS market was for advertising. Anyone who says anything different obviously doesn’t understand the company’s business model. Andy Rubin himself said that Android was designed for “smarter mobile devices that are more aware of its owner’s location and preferences.”

After acquiring Android, Google distributed the mobile operating system to handset manufacturers with the promise of a low-cost, free to license, upgradeable OS that would give companies a fighting chance against the popular iPhone. But more importantly, the operating system removed another barrier between users and Google’s search engine. Have you ever tried doing a search on an Android phone? It takes you straight to Google.com (not Yahoo, not Bing) and its hoards of advertisements. Now how does Google make its money again? Oh yeah, advertising.

Google joining the mobile OS space put a major strain on its relationship with Apple. Apart from enraging then-CEO Steve Jobs, the move also resulted in Eric Schmidt, Google’s CEO, stepping down from Apple’s board of directors. It was obviously a conflict of interest for Schmidt to sit in on meetings about Apple’s future plans, now that the two companies were direct competitors.

But the problems didn’t stop there. Jobs, as stated in his biography, considered Google guilty of “grand theft” in regards to Android, and vowed to do whatever it took to destroy the OS. His hatred has materialized into dozens of Apple-led lawsuits against multiple Android partners, with many more likely to come. And it doesn’t stop there either. Since Android has come into the picture, the Cupertino company has slowly been severing ties with the search giant in every way imaginable.

For starters, Apple just snatched up its third mapping software company in the past two years. It’s not hard to figure out that it’s looking to eventually replace Google’s mapping technology with something built in-house. But Google’s map-licensing deal with Apple is chump-change compared to the hit it’s going to take when Siri is fully up and running. If you own an iPhone 4S, chances are you’ve been using Siri to find answers that you typically would have used Google to look up. Sure, the service still takes you to Google if it doesn’t know something, but it takes you to an ad-free mobile page. Now imagine a more knowledgeable version, Siri 2.0, if you will, on hundreds of millions of devices. Yes, Siri makes Google very nervous.

While testifying before the Senate Judiciary Committee in September, Google employee Suzanne Michel admitted that two thirds of Google’s mobile searches are initiated from iOS devices. Wow. Even with all of the direct lines Google has integrated into Android to take users straight to its search engine, over 60% of its mobile searches happen on Apple’s devices. That’s devastating considering search is the whole reason Google got into the mobile OS market in the first place, and even more so when you think that Apple has now made it a priority to essentially wipe the company from its iOS platform. But it’s ok, Google still has Android, right? But how much longer can Google and its partners withstand the lawsuits?

Not only is Apple going after Android partners, but Microsoft has started attacking the manufacturers as well. Google’s OS must clearly infringe on patents owned by the Remond-based company, because Microsoft has asserted its IP (Intellectual Property) against nearly every Android device-maker in the business. Word just got out that it collects licensing fees on over half of all Android devices sold. On top of that, Android has gotten Google itself into hot water. The search giant is currently being sued by Oracle over its deliberate use of unlicensed Java software in its mobile OS. Ouch.

Imagine for a second that Google never purchased Android. Pretend that the company never entered the mobile OS market. Eric Schmidt would have stayed on as an Apple board member, and the partnership between the two companies would have thrived. Think native iOS support for Google services, like Gmail, and much deeper Google Search integration with Siri. With Android out of the picture (or a much smaller part of the picture), the iPhone would have inevitably been more successful. And Apple might have just taken Google with it to the top.

Admittedly, it’s unfair and impossible to predict the way that the mobile landscape would have unfolded had Google not purchased Android back in 2005. But it’s conceivable to think that if Google hadn’t acquired the mobile OS, Android would not be the powerhouse that it is today. And in turn, Google’s relationship with Apple would be much, much greater.

The bottom line isn’t that Android is doomed—it’s clearly not. Google has money to fight the lawsuits, and Android has certainly done wonders for the company’s brand over the last few years. But as Google stares down the barrel of seemingly endless litigation, and the possibility of being erased from the platform (iOS) that generates over 60% of its mobile search business, you have to wonder if Google regrets anything.

You have to wonder if Google’s gamble on Android was really worth it.