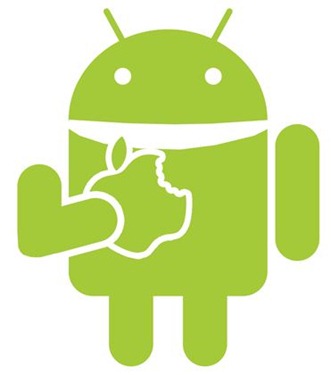 Android vs. iOS is a popular debate topic, but it might just be happening at the consumer level. 9to5 Mac ran an interesting story this morning about some comments made by Google’s Asia-Pacific president, Daniel Alegre.”When the iPhone succeeds, Google succeeds,” he mentions in an interview with AdNews.

This alone shouldn’t catch anyone off guard. With over 100 million iPhones out in the wild using Google’s little search bar built into Safari, why wouldn’t Google be pleased with the iPhone’s success?

There’s a little more to this equation. Let’s not forget about Google’s public purchase of AdMob in 2009. It is by far the most popular mobile advertising platform. Their adverts are scattered throughout the web, as well as in Android and iOS applications. Who is currently leading the pack in mobile ad impressions?

So iOS users are good at clicking Google’s AdMob ads and using their search bar, how else is the search giant benefiting from Apple’s smartphone? Perhaps with their suite of iOS apps. Google Maps is preinstalled on every iDevice and Google Search is constantly in the App Store’s top 50 most downloaded list.

The common denominator here is that all of these different components lead iOS users back to Google’s search engine and advertisements. That’s really what Google is, a search engine? People tend to forget that in the everyday banter between iPhone and Android users. In fact, Google probably doesn’t even care about cell phones.

Bill Gurley wrote a post on this very topic, calling Android OS just a moat for Google’s search engine. If you look at a great business like Google as an economic castle, a moat is a strategy or market dynamic that make the castle unreachable.

Android, Chrome Web Browser, Chrome OS, Gmail, and so many others, are all moats to Google’s economic castle. Notice how all of these Google products are software services with almost no viable costs? Not only that, but all of them essentially provide users with a direct line to their popular search engine. Winning?

Google just posted a revenue for the March quarter of $8.58 billion. It will be interesting to see what happens in the coming years in the smartphone industry. Analysts are predicting that by the end of 2012, there might be close to 1 billion Android handsets in use around the globe. That’s one hell of a moat.