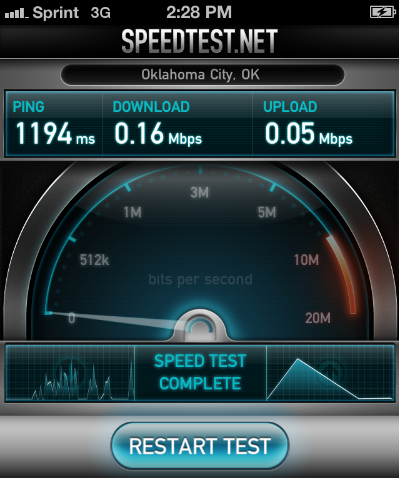 Sprint’s iPhone 4S launch turned out record-breaking handset sales for the carrier. After four years of waiting, the operator is finally able to offer its customers Apple’s coveted smartphone. But the rollout hasn’t been all sunshine and roses.

Several Sprint customers have been reporting 3G speed issues with their new Apple handsets. And although we’ve seen it with our own eyes, Sprint has stated that there isn’t a problem. But The Next Web has evidence that proves otherwise…

TNW is reporting that an internal email is making its way around Sprint right now in regards to the customer complaints. The email reportedly states that Apple and Sprint are working together to fix this “confirmed nationwide issue” of slow iPhone data speeds.

The site points to the Twitter account of a Sprint subscriber which confirms the internal message. Apparently Don Southard was read the email after speaking with his 6th customer service agent in the last two weeks regarding his iPhone’s poor 3G speeds.

But Sprint continues to maintain that there isn’t an issue, giving The Next Web another statement claiming that the iPhone 4S is performing as expected. But we’re not buying it. $10 bucks says Sprint customers receive a carrier update by Thanksgiving.