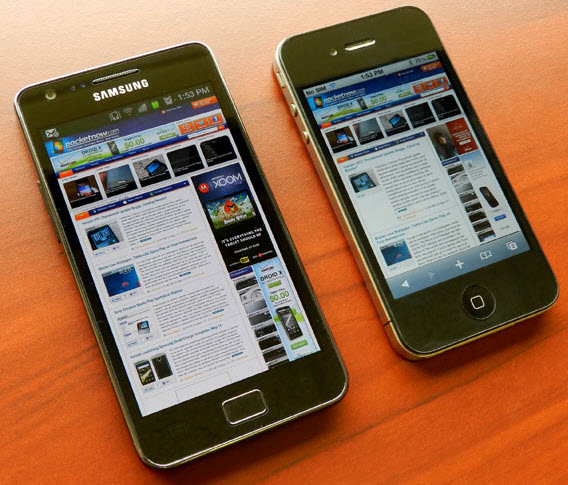 The infamous Android versus iOS debate can get pretty intense. Both sides have avid fans that will seemingly defend their favorite mobile OS to the death. And one of the most popular subjects for the two sides to argue about are the numbers.

Numbers directly reflect the success of a product. That’s why companies share sales data and other things like revenue on quarterly earnings calls — to show their progress. So the big question is, what do the numbers say about Android and iOS?

It’s impossible to do head-to-head comparisons between Android and iOS because the platforms are so different, but we’ll try to look at this as fairly as possible. Keep in mind that we will just be discussing smartphones today.

Just by looking at the results of the recent iPhone 4S launch, you can tell who wins this category. With customers piled up outside of Apple Stores and other retailers, the Cupertino company was able to sell over 4 million handsets during its opening weekend. That’s more than most Android-based phones sell during their entire lifespan.

We can go even deeper than that by looking at what the most popular phone is on each wireless carrier (US obviously). The only operators we can really judge are the ones that carry both Android and iOS handsets. In this case, that would be Verizon and AT&T (Sprint just recently started offering the iPhone).

Conaccord Genuity (an analytics company) recently published a report that revealed that the iPhone 4 has been the best selling smartphone on the top two US carriers for the last 6 months. Considering that both companies offer a number of Android handsets, this would suggest that the iPhone is generally more popular among consumers.

Android wins this category hands down. While it’s hard to determine an exact number here, marketing research firms place Android’s smartphone market share between 40 and 55 percent. The iPhone, on the other hand, garners anywhere between 24 and 28 percent. But Jim Dalrymple from The Loop made a compelling argument earlier this year for why these numbers don’t really matter:

“There is no compelling argument that anyone can give that says that comparing an operating system to a hardware device makes sense. None… That would be like comparing one model of Mercedes against all cars that GM makes and saying that Mercedes is losing. It just doesn’t make any sense… There are currently six manufacturers — Dell, HTC, Kyocera, LG, Motorla, and Samsung — making 42 smartphones using the Android operating system.”

So market share is by far an unfair way to measure platform success, but for all intents and purposes, we’ll give this one to Android. If you’re blindly throwing 50 darts at a dart board and are up against someone throwing 5 darts at a dartboard, hopefully you’ll have more stick than your opponent.

As aforementioned, it doesn’t make sense to measure the number of iPhones shipped versus the number of 43 Android handsets shipped, so we’ll just talk about the leading contenders. Samsung has recently been making headlines by announcing that it has reached the 30 million mark with its Galaxy S smartphones. The line includes the Galaxy S and the new Galaxy S II, which are Samsung’s best sellers, and has been available since March of 2010. In comparison, Apple has sold over 37 million iPhones in its last two quarters (6 months) with its latest two smartphone models, the iPhone 3GS and the iPhone 4.

Another manufacturer to look at would be Motorola Mobility. With its popular Droid line and recent acquisition by Google, Motorola Mobility is certainly considered a top Android manufacturer. The most recent report I could find regarding smartphones shipped was for Q2 of this year, which ended in July. During the three month period, the company shipped 4.4 million smartphones. That number included multiple models including the Droid 2, the Droid 3, the Motorla Atrix, and several other carrier variations. The company has since introduced the Droid Bionic and the Motorola Razr, so it certainly has a bright future.

I couldn’t find any recent official statements from HTC regarding smartphone sales either, but I did come across a few reports that placed the company’s handset shipments this year in the neighborhood of 11 million units. That’s quite a bit more than Motorola Mobility, but keep in mind that HTC makes phones with both Android and Windows Phone 7 operating systems.

The bottom line here is that there isn’t a single Android manufacturer that can compete head-to-head with Apple in regards to most smartphones shipped, so I have to give this category to the iPhone.

This, in my opinion, is the most important category for smartphone manufacturers. That’s why everyone is in this business right? To make money? So what better way to tell who’s winning than to see who is making the most money off of their products. Android is obviously just software, and Google doesn’t directly profit off of manufacturers using it, so once again we’ll have to compare iPhone revenue to that of the top Android handsets to even the playing field.

Last week Apple announced a record-breaking quarter for revenue, bringing in $28.27 billion dollars. If you figure that iPhone sales make up 50% of Apple’s revenue (and a lot of folks believe this to be the case), that’s roughly $14 billion dollars in revenue from, once again, just two smartphone models — the iPhone 3GS and the iPhone 4.

In comparison, Samsung’s total revenue (which comes from more than just smartphones) for the same quarter is thought to be just under $4 billion dollars.

The most recent revenue report I could find for Motorola Mobility was for the previous quarter which ended in July of this year. Over the three month period, the company brought in $3.3 billion dollars (this, once again, isn’t just from smartphone sales).

HTC came in at $4.4 billion dollars in revenue for the most recent quarter, which ended in October. That number includes tablet sales, and smartphone sales including both Windows Phone 7 and Android handsets.

Given this data (and mind you, it’s not dead on accurate considering some companies haven’t announced their earnings for this quarter yet), you could determine that the iPhone generates more money for Apple than the top three Android manufacturers make from their smartphone sales combined. Interesting.

So as you can see, numbers tell a lot about a product’s success. And if we are looking strictly at the numbers (trying to be as least biased as possible), the iPhone is outperforming the competition. It clearly wins in customer demand (if you don’t believe me, show me the last time customers lined up around the world for an Android smartphone launch), it sells better than any single Android handset out there, and it generates more revenue than smartphones from the top three Android manufacturers do put together. The only category that the Android platform seems to be winning in is market share, which is a given, considering the vast amount of different models that are available.

Don’t get me wrong, Android handsets are cool gadgets, and they’re equipped with cutting-edge technology. NFC, LTE chipsets, 3D displays — they have it all. But what they don’t have is the average person’s attention, and the numbers reflect that. More consumers are choosing Apple’s iOS-based smartphone than any Android handset on the market. There’s no fanboyism here, just facts. Men lie, woman lie, numbers don’t.