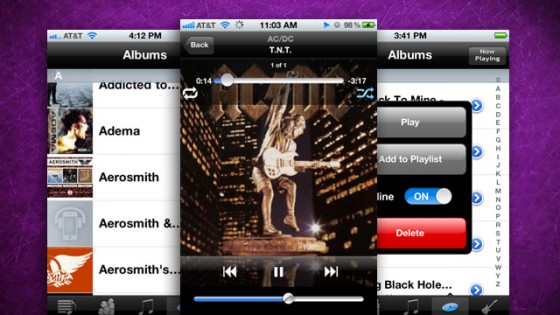 Remember Google Music? Back in May, Google unveiled a beta version of its cloud-based music service that allows users to upload up to 20,000 songs to its servers. Users can then access that music from almost any device with a web connection.

A major downside to the service is that it hasn’t had a native iOS app. It’s had a web app of sorts, but never an actual application. Until now. Macgasm is reporting that gMusic, a native Google Music app, has just surfaced in the App Store…

gMusic looks very similar to the Music application in iOS, and has a lot of the same features. You can sort your music by playlists, songs, artists, albums, and even genres. Here’s an excerpt from gMusic’s App Store description:

“gMusic is the only native iOS app that lets you access your Google Music account, which allows you to keep up to 20,000 of your favorite songs in Google Music. Now you can listen to your entire music collection without having to use any space on your iOS device.”

Google Music is in direct competition with Apple’s iTunes Match music service, so it’s kind of odd that Apple approved the application. Regardless, gMusic is available (for now) in the App Store for the iPhone for $1.99.