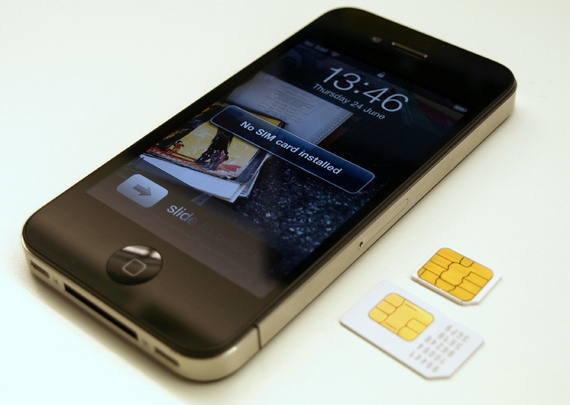 We already knew that the iPhone 4S was going to be the first world phone to come out of the Apple labs, and that meant that both GSM and CDMA handset flavors would roam on the networks of international carriers. This was good news, meaning that customers of both Verizon and Sprint could now take their handsets abroad and continue to use them.

Now, there’s even better news for those customers, with Macworld discovering that they might actually have an advantage over AT&T (and all other GSM carriers across the planet), thanks to the unlocked SIM slot on the CDMA iPhone 4S…

Macworld’s Jason Snell has found out that Sprint-sold iPhones will come with an unlocked SIM slot right out of the box, meaning any GSM SIM can be inserted and used, just as if the handset had been unlocked by Apple.

“Sprint plans to sell the iPhone 4S with its micro-SIM slot unlocked; Verizon’s will be initially locked, but if you’ve been a customer in good standing for 60 days, you can call Verizon and ask for an “international unlock.” (A Verizon spokesperson told me that this is Verizon’s standard policy for all world phones—it’s just the first time it’s manifested itself on an iPhone.)”

Verizon customers can also take advantage of an unlocked SIM slot, though according to the carrier, they will be locked at first. After 60 days, Verizon will happily unlock your iPhone for you, assuming your account is in good standing.

The reason for the unlocked SIMs is international roaming. Both carriers give their customers the opportunity to go abroad and buy a compatible SIM card from any carrier they choose. Pretty interesting news. We’re sure you’ll agree.

AT&T sells the iPhone 4S locked. And roaming charges can be steep.

Did Verizon and Sprint just become the best option for travelers looking to purchase the iPhone 4S?

UPDATE: Well, to answer our own question, no, no they did not.

In an update to this story, Engadget has learned that Sprint will not be offering unlocked iPhone 4S handsets and, in fact, the SIM card won’t even be removable.

“Our SIM does not come out of the device – I believe the same is true of Verizon’s iPhone but you would need to confirm that with them. Customers can sign up for one of our international rate plans and use this phone all over the world. When traveling internationally, there is a setting that must be turned on within the device to connect to GSM. The phone will work with a SIM that is provided within the device out of the box. International voice and data charges are on a pay-as-you-go basis and vary based on the country where the customer is using their phone; a list of rates is available at www.sprint.com/international.”

We’ve not heard from Verizon yet, but we suspect we’ll get a similar response from them as well.

Move along folks, nothing to see here.