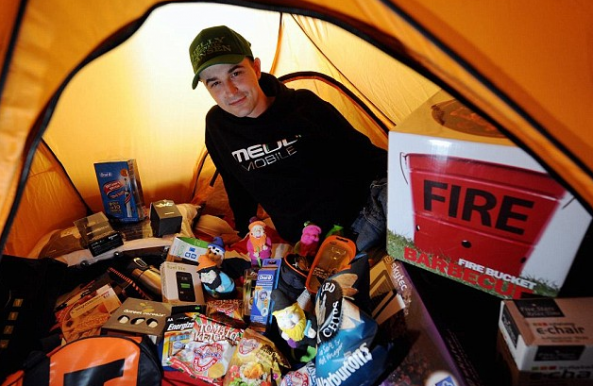 The iPhone 4S has seen staggering customer demand in its first 24 hours of presale. Online preorder pages are already showing shipping dates 1-3 weeks out for Apple’s latest handset, depending on which model you’re after.

If you’re looking to snag a 16GB iPhone 4S in the near future, carriers are suggesting that you visit your local retail store on October 14. But you might want to get there early, as it looks like people are already starting to line up…

We reported on Rob Shoesmith back in July as he was gearing up for his iPhone 5 Experiment. The marketing man was looking to campout in front of his local Apple Store in anticipation of Apple’s next-generation iPhone launch.

Well here we are, three months later, and Rob has now been camping outside of a London Apple Store for several days. And luckily he decided to take a break from talking to the media and writing on his own blog to chat with iDB.

iDB: Hey Rob, first I just wanted to say thank you so much for taking the time to talk with us.

iDB: I think we should start this off by giving our readers some background information about you. Who are you? And what is your iPhone 5 Experiment all about?

“My name is Rob Shoesmith. I work for a Californian based app developer under the name of MEDL Mobile, working in marketing and PR.

The iPhone 5 Experiment is all about camping out for the 5th-gen iPhone (4S) outside the Covent Garden Apple Store without spending a penny of my own money on anything.

To date I’ve had well over 150 companies send me their products and kit. I’m using my Twitter account @shoesmith81 and YouTube RobertShoesmith whilst in line to reach out for the things I need.”

iDB: Interesting. So the iPhone 4S was announced last Tuesday, when exactly did you start camping out?

“That Tuesday morning actually. It was 10am UK time, 2am PST.”

iDB: And which Apple Store are you camping out at again?

“The Covent Garden location in London.”

iDB: Did you get to see any of Apple’s iPhone event?

“There was a lot of media coverage outside the store and loads of journalists were asking about my experiment. I heard most of the information over the grapevine.”

iDB: What do you think of the new iPhone? Were you let down?

“If I’m being honest, I was expecting more. But it’s still in my opinion a great phone.”

iDB: Agreed. So the iPhone 4S hits stores October 14, which is next Friday. Do you have enough supplies to last you?

“More than enough! It’s been a real tough experience with very little sleep and humbling experience to see how hard life on the streets can be. I was ignorant before the experiment and will most definitely be helping homeless shelters in the future. I’m only here for 10 days and some of these guys have been here for years. They have unbelievable character!”

iDB: Yeah, I bet it’s not as easy as some people might imagine. How has the weather been treating you?

“Not too bad during the day, but horrendous at night. Even with all the kit supplied I’m still shaking with cold. It’s bad when I wake up and get out of the Mucus sleeping bag.”

iDB: That sounds awful. Other than the cold, are nights pretty rough?

“Yes. Noise at night is awful when trying to sleep. I’m only sleeping three hours a night. Many people thought I was homeless, but I explained I wasn’t. Having a tent pitched at the minute is a nightmare, so to blend in it’s best not to stand out at night. I have a security guard, but you still have to sleep with your eyes open.”

iDB: Speaking of which, what is the general public’s reaction to the whole thing?

“Really positive and loads of people have got me hot drinks and snacks.”

iDB: What else do you do for food and drink?

“Interesting. I posted on Twitter and YouTube that I needed water and in exchange I would give people iPhone cases (good swap in my opinion for people) see YouTube. As far as food goes, several restaurants have donated meals.”

iDB: Now on the other end of that question, where do you go to the bathroom?

“There is a local toilet about 2 minutes away, but it closes over night. I have a bog in a bag :)”

iDB: I’m not even going to ask. But in wrapping up here, is there anything else interesting that you’d like to share?

“I have connected with hundreds of different people everyday and the experience has been so hard yet incredible. I will have memories I will never forget and it’s changed me in so many ways. Everyone should spend a cold night on the street to appreciate how hard it is for the homeless. I have gone into this on the blog and a shelter will be getting all the camping gear after the experiment is finished. Camping for so long has been a lot tougher than I thought it was going be and I wouldn’t recommend it for the feint hearted!”

As of right now, Rob says that there isn’t anyone else in line with him. We’re not sure if anyone has started camping out here in the US yet. But if preorder sales are any indication, I’d expect to see lines forming over the next several days.