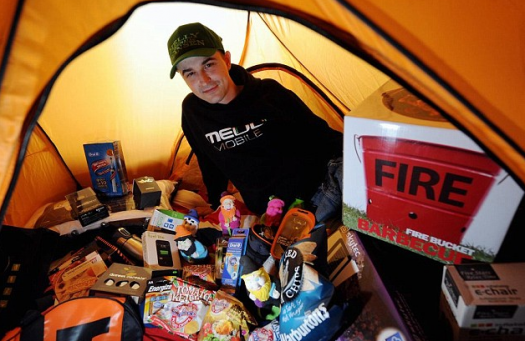 Don’t get me wrong, I’m looking forward to the next iPhone as much as the next guy. But this might be a little extreme. The UK’s Metro Online is reporting that somebody is already in line for the iPhone 5.

Even though the device isn’t expected for another 1-2 months, Rob Shoesmith has already set up camp outside a London Apple Store in anticipation of the new gadget. No he’s not crazy, this is actually all part of his plan…Shoesmith is a 29 year-old marketing executive from Coventry, just north of London. He currently handles public relations for the iOS app development firm, MEDL Mobile. The PR expert decided a few months ago that he was going to start camping out well ahead of schedule.

“I will be camping out on the streets of London for the launch of the iPhone 5 in a marketing and pr experiment.”

Shoesmith’s iPhone 5 Experiment has not only garnered a lot of attention, it’s also gotten him a lot of free stuff. In exchange for advertisement on his popular blog, companies have been giving him free food, gadgets, and other things to help him survive the urban camp-out.

As of this writing, Shoesmith has already acquired $1100 worth of outdoor gear, clothing, and loads of free food and gadgets. He has made it clear however, that he plans to donate any leftover goods to charity after the experiment is over.

What do you think? Will he make it?

UPDATE: Mr. Shoesmith gave us the heads up that he has not actually started camping out yet, and won’t until a few weeks before the expected iPhone launch. (Sorry, the pic of him already in the tent was misleading.) He is currently collecting food and other items from vendors to take with him. To keep up to date with Rob’s venture, make sure to visit his website.