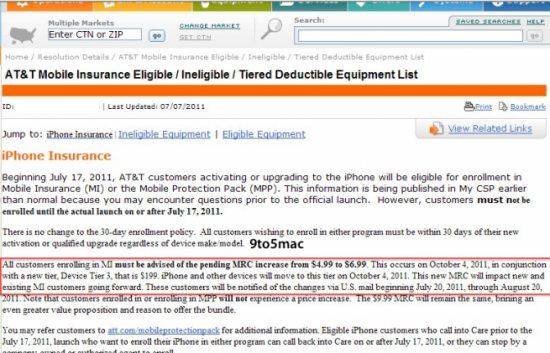 If you think iPhone rumors are bad now, just wait until we get into August and September. Until Apple unveils its next smartphone, the entire tech industry is in a game of “guess what and when” for Apple’s next announcement.

While the answer to the first question seems to vary depending on who you ask, most folks tend to agree that the device will launch sometime this Fall. Now the exact date is anybody’s guess, but 9to5Mac just received an interesting tip that could suggest we’ll see the new iPhone launch on October 4th…

The flyer you see above is an internal AT&T document that notes a change in the iPhone’s insurance policy. The section that’s highlighted discusses moving the iPhone (and other devices) to a new device tier starting October 4th of this year.

While the author admits that this information is, “light years away from launch date confirmation,” he does believe that it could be a sign that new iPhones will hit AT&T in this timeframe.

To be honest, this is a fairly common insurance practice. They raise your monthly costs, but lower your deductible a bit. It’s all about balancing numbers for them, and I don’t know that the mention of an iPhone makes this any more significant.

Not to mention this date doesn’t jive with any previous reports that have pointed to an August-September release. In any case, we like Seth’s advice on snatching up AT&T’s iPhone insurance before October 4th, it might save you a few bucks.

When do you think we’ll see the next iPhone?