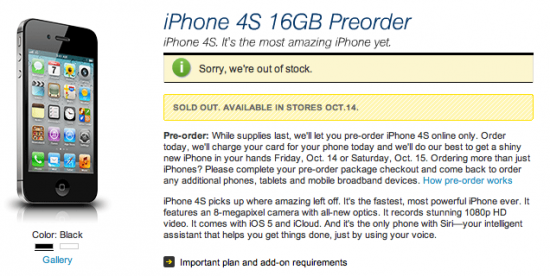 Early yesterday morning, Apple and its carrier partners around the world started taking preorders for the iPhone 4S. The Cupertino company unveiled the smartphone last week to mixed reactions from pundits and fans.

But the fact that Apple didn’t change the handset’s outward appearance doesn’t seem to have derailed customers from snatching up the device. The iPhone 4S appears to be selling as fast, if not faster, than its predecessors…

Late yesterday afternoon, Reuters reported that AT&T had sold 200,000 iPhone 4S in its first 12 hours of availability. Then came word that Apple was pushing shipping dates out 1-2 weeks for the device, both internationally and stateside.

Now we have confirmation that US carriers are seeing the same level of demand. AT&T has all three models of the iPhone 4S shipping within 14-21 days, and Verizon only has 32GB and 64GB versions left for October 14th delivery.

Sprint, who is offering Apple’s smartphone for the first time, is completely sold out of the 16GB model. According to its website, if you want the entry level iPhone 4S, you’ll have to visit your local Sprint store on launch day.

So it sounds like if you’re after a 32GB or 64GB iPhone, you shouldn’t have any problems (yet) preordering the device. But those looking to snag a 16GB model by October 14th will likely have to head to their local retail stores next week.

And from what we’ve heard, there are already people lining up.