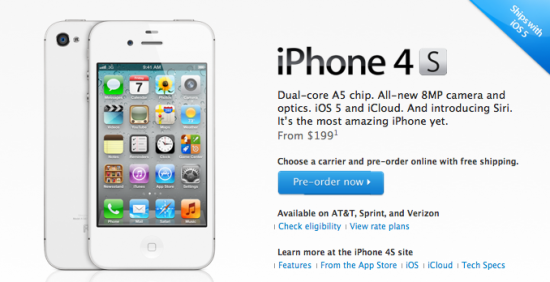 MacRumors points to a report from Reuters citing that AT&T is seeing extraordinary demand for Apple’s new smartphone. As most of you know, Apple opened up iPhone 4S preorders just after midnight (PST) last night.

The company has been met with a lot of criticism over its latest handset, which it unveiled last Tuesday. But that doesn’t seem to have affected consumer demand for the device. AT&T believes that they’ve already sold 200,000 of them…

Hundreds of thousands of people gathered online last night to ensure they’d be among the first to get the new iPhone. They battled through extended delays and site crashes to secure their orders.

And, according to Reuters, they did so in record numbers. With AT&T alone selling nearly a quarter of a million handsets in 12 hours, the iPhone 4S is on pace to set all kinds of sales records.

As MacRumors mentions, in comparison, Apple sold 600,000 iPhone 4s last year during its first day of preorders. But that number included the US, which means only AT&T at that time, and several other countries. Wow.

And this was the phone that some critics called “disappointing.”