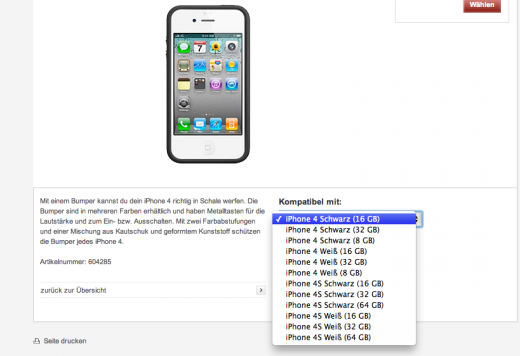 It’s already been rumored that the iPhone 4S will come in a 64GB flavor, and now mobile carrier Vodafone Germany is listing the iPhone ‘4S’ in three different capacities on its website.

Carriers have been known to create placeholders for unreleased Apple products, with some carriers even offering preorders for the fifth generation iPhone before it is announced. In the case of this Vodafone listing, the iPhone 4S is listed for the first time instead of the ‘iPhone 5’ placeholder that we’ve seen before. The storage options line up with rumors as well…

It’s important to not put too much faith in carrier placeholders, but Vodafone’s listings line up with the circulating rumors on the iPhone 4S. The listing even includes a 8GB iPhone 4 option. Apple is expected to introduce the iPhone 4S as its flagship device and revamp the iPhone 4 as a 8GB device that fills the entry-level position previously held by the iPhone 3GS.

Vodafone’s listings refer to iPhone models that are compatible with Apple’s bumper case. Many believe that the iPhone 4S will be a very slight physical redesign of the iPhone 4. The two devices will likely look nearly identical on the outside.

While doubt has been raised that Apple will bump up the iPhone’s storage to 64GB, recent reports seem to affirm that a 64GB iPhone will be offered soon. Apple’s iCloud and iTunes Match services will make the wireless storage and syncing of data seamless for consumers, so it’s interesting that Apple would consider adding more physical storage to its products.

The name ‘iPhone 4S’ was recently discovered in iTunes beta code, and Gizmodo got its hands on the cheaper iPhone 4 over the weekend. Apple’s event is tomorrow, so all will be revealed in due time.