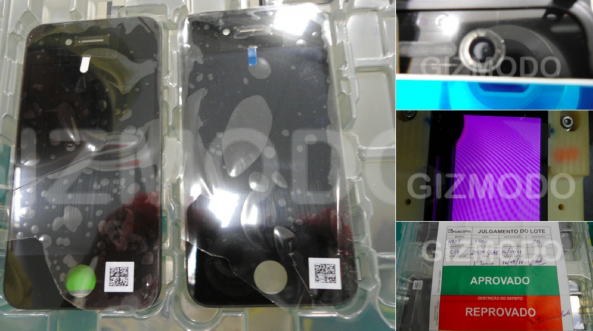 Gizmodo has done it again. The same site that got its hands on the iPhone 4 before it was released has also procured images of what is assumedly a new iPhone to be announced on Tuesday.

The device, codenamed ‘N90A’, is not the iPhone 4S (codenamed ‘N94). That device is still coming, but this photo is of the cheaper 8GB iPhone 4 that will be launched next week, too.

“Our Brazilian brothers, Gizmodo.com.br, got their hot little hands on a few photos of one a new iPhone, to be announced next week. How? Well, there’s a Foxconn factory in Brazil, and Pedro & co got one of their men inside.

Inside, they found a new-SKU iPhone that looks just like the old iPhone 4.

Most of these photos don’t look like anything special—just snapshots of a familiar face. But when you get to the last one, a picture of a Foxconn Brazil quality control form, you’ll notice something strange: a different model number, N90A.”

Gizmodo notes that these specific devices in the picture above won’t be hitting shelves anytime soon, due to a problem with the camera lenses. The design itself is very real, and this is the closest thing to a confirmation that Apple will unveil a cheaper iPhone 4 alongside the 4S on Tuesday.

As you can see, this cheaper iPhone 4 features the exact same design as the current iPhone, but the device will have less onboard storage and reportedly rely heavily on iCloud. The iPhone 4S is rumored to come in a 64GB flavor and feature Apple’s secret “Assistant” feature in iOS 5. This cheaper iPhone 4 will probably replace the 3GS and serve as Apple’s entry-level device.

A more affordable iPhone will open the flood gates to many more potential customers for Apple. The device has been rumored to start at $50 once it’s made available to the public.