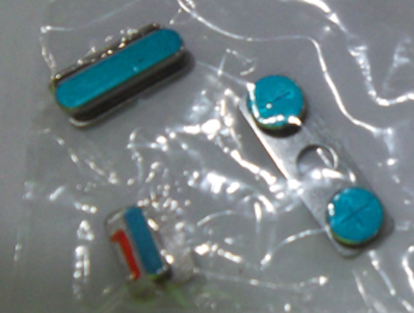 There’s been a lot of speculation regarding the design of the iPhone 5 over the past few weeks. Initially, the device wasn’t expected to look too much different than its predecessor. But now there’s a stack of evidence suggesting otherwise.

The images that recently surfaced on Case-Mate’s website added fire to the controversy, as many folks didn’t care for the mockups in the photos. Well cheer up. iPhoneItalia just published some pictures regarding the new handset’s design…

The Italian tech site posted some images yesterday of what appears to be a volume rocker switch, a mute button, and a power key. They claim they’ve received the photos from a reliable source, and they believe that the parts belong to the iPhone 5.

What’s interesting here is that if the parts are actually for Apple’s upcoming smartphone, they do give us some insight to the device’s design. First, notice the volume buttons.

After the Case-MateGate scandal, the tech world was up in arms about the iPod touch-like volume rocker switch depicted in the iPhone 5 mockups. But the image above shows round, separated buttons, like the ones found on the iPhone 4.

Then there’s the mute switch, which iPhoneItalia describes as backwards compared to the switch on current models. They believe this confirms the rumors of the mute switch being moved to the right side of the handset on the iPhone 5.

While the opposite-side mute switch lines up with the dozens of purported iPhone 5 cases we’ve seen, the volume buttons don’t. All of the cases have pointed to thin, separated volume buttons, so we’re not sure who to believe at this point.

With the end of September approaching, Apple is running out of time to meet the expected October 4 deadline for its announcement. So we are bound to hear something out of Cupertino soon. Or so we hope.