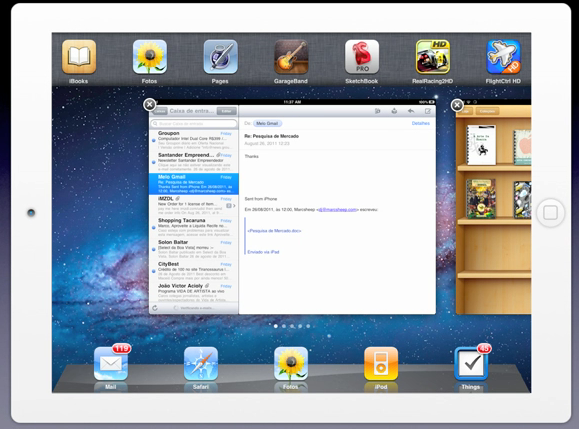 After we spent years begging Apple to finally add multitasking to iOS, the boffins in Cupertino relented, bringing the joys of multiple running apps to our iPhones and iPads. Well, sort of.

Apple’s implementation has many-a-geek arguing over whether it really is multitasking. Once you get past that little hiccup, it works surprisingly well. But could it be better?

The launch of iOS multitasking hasn’t stopped the creative types from showing us how they think multiple apps should be handled, and a new video caught our eye today, and we’re rather impressed…

Borrowing heavily from the HP WebOS card metaphor – hey, it’s worked so well for the TouchPad, right? – the concept comes courtesy of Apple fan Marcos Antonio de Lima Filho, and offers something we don’t remember seeing in any prior concept videos: draggable apps.

Marcos’ idea is to move the multitasking tray to the top of the screen, rather than the bottom, and allow apps to run in ‘workspaces’ in a similar way to Mission Control on a Mac. That way, apps could be dragged out of the multitasking tray and into an empty workspace. Apps could then be moved and re-ordered, and presumably switched between using a gesture, similar to the ones found in iOS betas on the iPad.

We love these concept videos here at iDB, and if you’ve got one that you think we’ve missed, then please do let us know via one of our various points of contact.