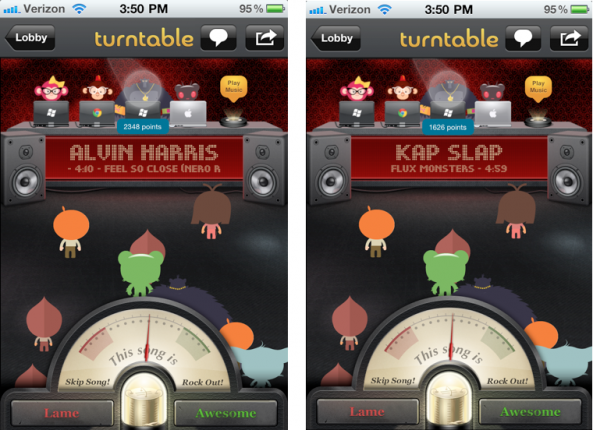 Site Turntable.fm has been a huge success with music lovers online, and TechCrunch is now reporting that an official iPhone app should be spinning its way into the App Store as soon as next week.

In case you aren’t familiar with Turntable, you can visit the project’s website to see what’s up. The tagline is “play music together,” and that’s exactly what Turntable lets you do. It’s like the music equivalent of Facebook, with chat and listening “rooms” for you to DJ tunes and share music with friends.

“As you can see, they’ve done a great job moving the look and feel of the app over to mobile. People who have used the app say it’s “awesome”. Like the site, the app has deep Facebook integration, and we assume you still need to know a Facebook friend with access in order to use it yourself.”

Turntable has always been a service that requires Facebook to give you access to the platform. Instead of being able to just create an account, you have to have a Facebook friend that already uses the site. This keeps the social aspect of the platform — a very important aspect, mind you — alive and thriving.

Facebook is planning a huge event on September 22, and it’s believed that the company will finally unveil its official iPad app. TechCrunch says that there are “whispers” of Turntable becoming a part of Facebook at the upcoming event, but we’ll just have to wait and see.

In the meantime, we can’t wait to start DJing with Turntable on the iPhone!